While preparing for our new series, "Fake News That's Not in the Bible," I ran across a book entitled "Traditions, Folktales, and Hocum." The author pointed out that some things many people believe to be scriptural in origin are really not. Take, for instance, that old saying that "everything happens for a reason."

That statement is often quoted as being in the Bible, but of course it isn't -- at least not in that form. It's derived from a passage in the book of Romans in which the apostle Paul declared, "We know that all things work together for good to those who love God and who are called according to his purpose." Most of the time we remember the first part of that verse (all things work together for good) and skip the rest. We fail to remember that to ignore the latter half of Paul's statement makes the first part of it impossible.

I think it was Charles Wallis who told about a little girl who was telling her mother about the day's activities. "We played wedding," she said. "I was the bride, Elsie was the bridesmaid, and Elsie's sister was the flower girl." Her mother said, "Well, who was the groom?" Her daughter replied, "Oh, I wanted a small wedding, so we didn't have a groom!" There is a point to that story. A wedding without a marriage partner hardly constitutes a workable plan.  Some things are conditional upon other things. To expect the promise of St. Paul without acceptance of the condition is wishful thinking. 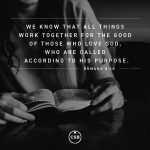 Paul never meant to suggest that everything happens for a reason. To believe that implies that sin, wasted opportunities, and evil are ultimately good. Many years ago Clarence McCartney preached a sermon entitled "Come Before Winter." The theme of the sermon was that wasted opportunities bring heartache -- and no power on heaven or earth can bring them back. Wild seeds produce a wild harvest, and the resulting suffering can destroy us. Judas betrayed Jesus, and when he realized what he had done, he took his own life. King Saul ignored God's command, and the brilliant career of Saul came to a tragic end. Only a foolish person believes that everything turns out for the best no matter how he/she lives.

What Paul really said was that all things work together for good for those who love God and are called according to his purpose. The latter part of this verse is the condition upon which the first hinges. This is to say that things turn out for the best for those who come at life God's way. This is the tremendous promise of the Bible. Live life God's way, and God will use everything that happens to you for good. It won't work any other way.

In the name of the One who can do immeasurably more than all we ask or imagine,
Bruce Jones, Pastor and Co-Creator,
Imagine Church of the Carolinas